My husband and I are active participants in the now-familiar data-informed “sharing economy”-- a collection of cloud-based networks matching temporarily available assets with the people who need them now.  Avid AirBnB hosts, my former home office frequently holds vacationers and future San Franciscans as they discover The City.  ZipCar members now too, we let go of our rarely needed second car (a sexy 300ZX) with confidence (if a touch of wistfulness) and never looked back.  Thoughtful early adopters, we’ve been impressed with the counter-intuitive freedoms and added vitality these cultural experiments have brought into our lives.

From ZipCar and CityCarShare (for professionally-owned sharable assets) to RelayRides (for personally-owned shareable assets), car-sharing has become a welcome answer to the “Do I really need to own a car/second-car?” question.   Though we’ve been slower to embrace the so-called “ride-sharing” movement (a dynamic pseudo-commercial marketplace responding to a growing need for on-demand trips about town),  I anticipate being won over there, ultimately, as well.  But more on that in a minute.

Indeed, it appears that a “transportation revolution” is being staged today.  It is being staged (and occasionally fought) through creative innovation on many fronts, involving traditional and non-traditional players, and expanding the boundaries of what it means to “share”.  In a world where leaders in massive population centers substitute “mobility” for “workability” when declaring the three pillars of a Smart City, a “transportation revolution” is certainly overdue.

In light of this, today’s featured stories extend this asset-sharing ethos in two powerful directions.  In the first, BikesMakeLifeBetter helps companies design pools of bicycling assets for sharing across a corporate communities, generating both functional and cultural benefits.   In the second, the U.S. Postal Service is innovating behind the scenes -- collaborating with competitors UPS and FedEx to share strategic bits of their asset infrastructure and making them each more efficient and effective.   Innovative initiatives like these generate a culture of sharing that goes beyond  the person-to-person, creating perhaps a new normal for business. 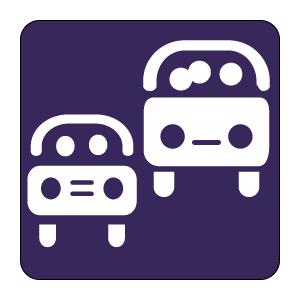 But now - back to the "ride-sharing" movement.  Today's ride-share services began in a manner true to their name.  Using cloud-based ride-boards, riders could conveniently find anything from a ride to work to a trip across the country with someone going the same way.  This arrangement, when executed well, delivers a clear triple-bottom-line to all those involved.  ZimRide and SideCar were leaders in mainstreaming this practice.

But from a business perspective, apparently the real money (managed technically as a donation) comes from the more chronic scenario of needing a quick lift across town.  Catalyzed by a chronic under-supply of cabs when you need them, San Francisco-based ZimRide and SideCar have both come to emphasize this new on-demand ride-sharing model -- ZimRide through its one-year-old Lyft service (which recently received a capital infusion from Andreessen Horowitz), and SideCar through a recent change in messaging on its website.

The fever has gotten so high that recently Uber, the ground-breaking network of professional drivers responding to the same taxicab under-supply, has responded to this new competition with reduced prices. Meanwhile, upstart InstantCab is merging the two models, creating networks of both professional and community drivers for on-demand trips about town.

But is this new phenomena really “ride-sharing” (eliminating the need for more cars on the road)?  Or is it yet another new business model for making friends and raising cash off the sunken costs of already-owned assets? In many cases, it is the latter. But hey, even this is what we need now. I'd like to think that those pink-mustachioed drivers were out and about anyway and didn’t hit the busy streets only in the hope of picking up riders.  But as long as they make the no-car or low-car lifestyle choice more feasible, I say "Bring it on!"